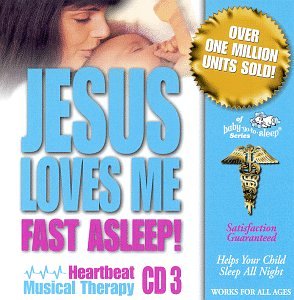 Jesus Loves Me Fast Asleep is the Christian version of the Baby go to Sleep series of Heartbeat Lullabies. The tradition nursery songs with a human heartbeat rhythm is the most successful recordings to get babies to stop crying and sleep all night and have sold over 3.4 million copies.The therapeutic music also has been discovered to calm adults suffering from PTSD, Insomnia, Dementia, Alzheimer's and Chronic pain.

Crack babies going through withdrawal have also been comforted by the Heartbeat Lullabies and increasingly pediatricians prescribe it for colicky babies or those who have trouble falling asleep. -- "i"BabyTalk Magazine

Regarded as one of the century's great advances -- St. Louis Post-Dispatch

Woodford's Baby-Go-To-Sleep Heartbeat Lullabies have sold more than 3.4 million copies -- and the US Military has given out more than 1,000,000 copies saying they are directly linked to improved job performance and reduced household stress and decreased child and spousal abuse. --"i"National Enquirer, October 20, 1998

During the 1970's and 80's, I was a successful record producer, publisher and/or song writer for acts such as The Commodores, The Temptations, Alabama, Hank Williams, Jr., Wayne Newton, and Barbara Mandrell. I was motivated by fame, money, and ego -- not helping children get well. In Oct. 1984, a daycare center provider told me there was a need for children's music with a more contemporary sound, more like what parents listen to at home. You don't get rich and famous making music for daycares. You can, however, achieve immortality in the music business by producing a Christmas hit. We decided to record contemporary versions of five Christmas songs. We sent free copies of our experimental Christmas recording to 150 daycare centers along with a questionnaire. I expected the responses to confirm my hopes for a hit. All 150 questionnaires came back positive, but what moved me were the barely legible comments from kids in two inch high lettering -- "Thank you, Mr. Woodford. We want more music!" I felt good and wanted to do more. My thought was to record an actual human heart from the chest, where a child lays her head on her momma. I could use it as the rhythm (drums) of traditional lullabies. What I thought would be a 3-day project became a technical challenge involving 1700 hours in the studio just to produce 5 songs. We sent the heartbeat recording to the 150 daycares, plus had nurses test the music in a newborn nursery at Helen Keller Hospital in Sheffield, AL. The nurses found that 94% of crying babies stopped crying and were calmed in less than two minutes when the Tape recording was played. Although the results were intriguing, I didn't devote much time to the project until I got a call from the Cardiac Recovery Unit at the University Hospitals of Alabama. A Down Syndrome baby, recovering from open heart surgery, was agitated and resisting his ventilator. When a patient fights or tries to breath against an oxygen support system, they become oxygen deprived. Their heart rate goes up to compensate for the lack of oxygen in the blood stream and they can die. The baby was calmed in less than two minutes when the nurses played the music. The nurses were very excited to discover they could use something so simple and non-invasive to calm children. Besides using them during life threatening situations, the nurses believed they might also be helpful in preventing the infants and children from getting agitated. I was invited to come to the hospital to discuss using the music with other children in the unit. Upon entering the intimidating, humbling, high-tech environment of the CICU, I became weak-kneed and light-headed. I saw babies, cut from the neck to the belly button, attached to wires, tubes and monitors. My heart went out to them. I gained immediate respect for nurses in the ICU. I was surprised by the annoying sounds of the loud, intermittent, startling, beeping and buzzing sounds coming from the life support equipment . I observed nurses scurrying from one child to the other, doing whatever was necessary to keep these children alive long enough for their heart repairs to begin healing. The nurses stressed the importance of rest and sleep in promoting rapid healing. In some cases the only solution for calming the children is to sedate them. They requested I find a way to play the music continuously, but at a lower volume, because it was making the nurses tired! For the next six months I worked on perfecting the recordings. Using the nurses' suggestions, I increased the volume of the heartbeat and added songs. Seeing agitated children calm down so quickly seemed like a miracle. I was as amazed as the nurses that it was working so well. As I watched the babies quickly calm down, I could feel the presence of God in the room. Whenever I left the CICU, I saw people praying in the waiting room. I was soon convinced the Tape was helping to answer those prayers. Nurses don't buy the things used in the hospital and are not allowed to make long distance phone calls. I decided to set up an 800# and provide the Tapes free to any organization who helps special needs children for use in their facility. It didn't take long to run out of money. I sold the studio and all my music business assets. My wife, Lola Scobey, gave up her own successful writing and music business career to help me pursue my mission. She gave her time and marketing expertise to sell the Tapes to the public. Without her input, expertise, and support we would never have been able to survive. I learned as much as I could about problems in the intensive care units. I measured sound levels at different frequencies to see what babies were being exposed to in the environment. I watched their reactions to noises. Most sounds were unfamiliar to the babies and were often frightening or startling. The most intense startling sounds came from telephones and the frequent intermittent tones from alarm monitors. All these sounds were depriving the babies of the rest and sleep needed for healing. When nurses played our music therapy recording, babies calmed right down.

Because it is so calming, compassionate care providers have been more than willing to try our music therapy recordings in all kinds of settings and situations. They have been used in over 8,000 hospitals and special care centers. They are also used in over a million homes to get children to sleep through the night.

I believe the Christian version is one of the best ways parents can introduce Jesus, the person, to a young child who may have a problem understanding and relating to someone they can't physically see or touch. By introducing the peace and love of Jesus to children through calming, comforting music and reassuring messages, God becomes real to them.

For 18 years Terry Woodford produced, wrote, published and/or engineered records for artists such as The Supremes, The Temptations, The Commodores, Wayne Newton, Hank Williams, Jr., and Alabama. He held many positions in the music industry, including Regional Board of Governors for NARAS (National Academy of Recording Arts and Sciences). He co-founded the first college degree program to teach the commercial music business at the University of Northern Alabama.

In 1987 he left the entertainment industry to pursue music as a method for healing infants and children. As the leading authority on pre-recorded music therapy for children, Woodford is often interviewed on TV, radio and in newspapers and magazines throughout North America.

He is a nationally recognized speaker who lectures on how to identify sounds that can be harmful or healing for children. His popular wellness topics include Don't Let Them Cry - Get Your Baby To Sleep Naturally and how to reduce sleep deprivation in the workplace. He is a very entertaining and informative speaker sought after by hospitals, corporations, and national conferences.

In their quest to produce the freshest, most natural product possible, Sunrise Fresh pursues innovation, an approach that is unusual in the dried fruit industry.

Near the Fukushima disaster site, scientists and citizens work tirelessly to clean radiation from affected farmland soils. Each weekend, they travel to a small village near Fukushima and labor to rehabilitate the land.

The acquisition will accelerate the availability of closed-loop moisture control for continuous lines for METER Food customers.

METER Group is pleased to announce this year’s recipients of the Grant A. Harris Fellowship.

Farming is all about knowing the weather. Read about METER's role in The Trans-African Hydro-Meteorological Observatory (TAHMO) initiative.

Learn how Edesia uses the power of water activity to fight malnutrition and world hunger.